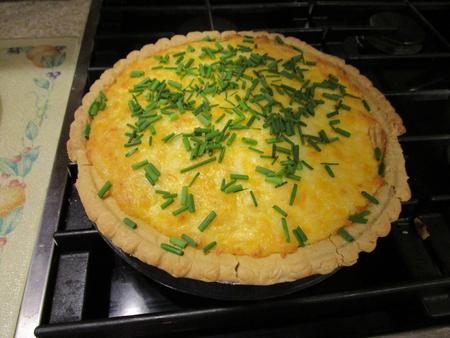 OOPS!  We broke the crust in two places.

We are always looking for recipes to try using fresh seasonal vegetables.  As we are starting to get        the season's first tomatoes, we decided to try this recipe which Jan found on the Internet.  It is from      Paula Deen.  We did not make any changes.  We did find that the first night, it was a little loose but      by the second night, when it was reheated, it was much better.  We will be making this again.

1/2 cup sliced green onion (we used Vidallia onions that had been chopped).

2 to 3 Tablespoons of chopped fresh chives

Place a colander in the sink and put the tomatoes in the colander in one layer.  Sprinkle with salt and

allow to drain for 10 minutes or more.  After the tomatoes have drained for the allotted time, blot with

a paper towel to take out some of the moisture that still remains.  If using Vidallia onions, while the

tomatoes are draining, saute them in butter until they are soft.  Layer the tomato slices, basil and

onion in the pie shell.  Season with salt and pepper to taste.  Combine the grated cheeses and the

mayonnaise together and mix well.  Spread mixture on top of the tomatoes, basil and onions.  Bake

for 30 minutes or until top is lightly browned.  Remove from oven, sprinkle with chopped chives, let