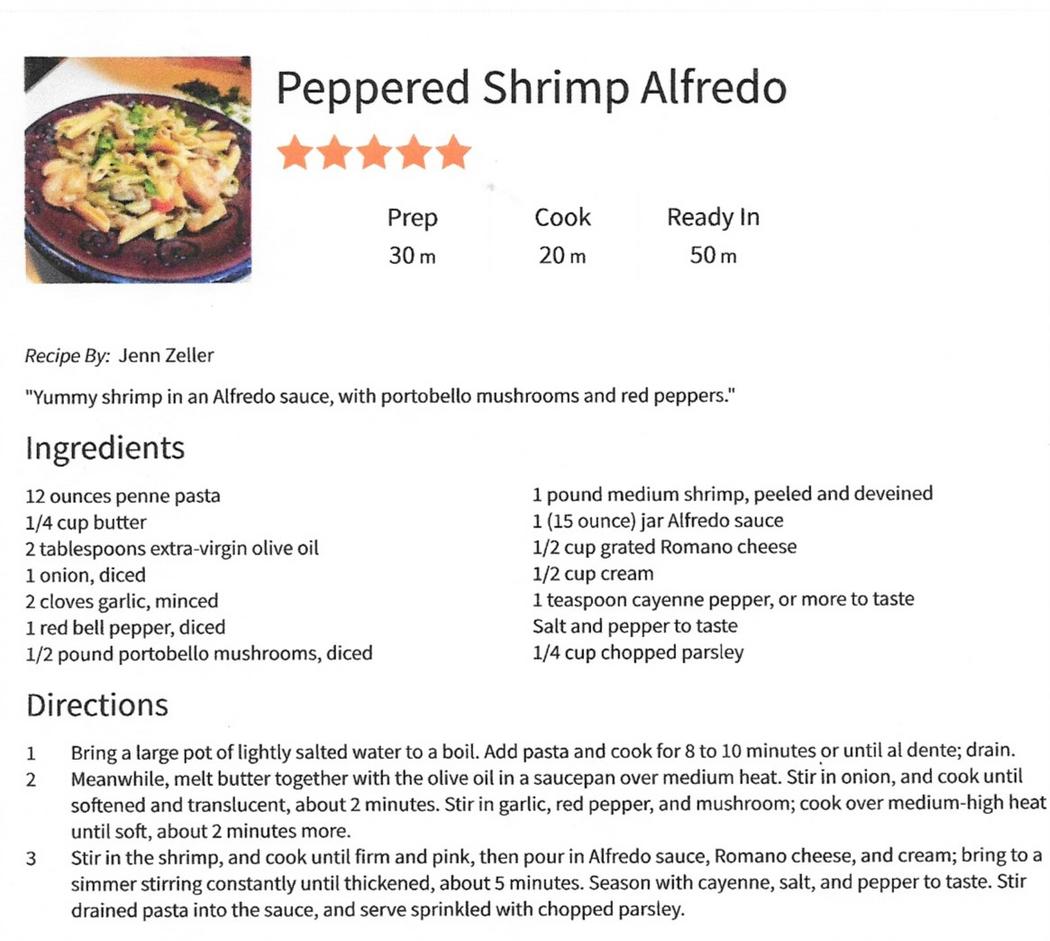 ~I found this recipe on the Internet.  The original recipe comes from AllRecipes.com  We ~made a few changes to it.  #1, we cut the shrimp in half, #2, we used 1 1/2 tsp. Old Bay ~Seafood Seasoning in place of the cayenne pepper, #3, we used a combination of red and ~yellow bell peppers instead of just the red bell pepper because that is what we had on hand, ~#4, we cut the amount of Penne from 12 oz. to 10 oz. and finally, we grated more Romano ~cheese to serve on the table.  Jan also suggested the next time we make this recipe, that we ~replace the fresh Parsley with fresh Basil. The beauty of recipes such as this is that you can ~start with the recipe as written and then tweak them to your personal taste.

Chef Tested, this recipe is excellent!

~So there we were at Cousin Diane's home in Mt. Pleasant, SC, right next to Charleston where ~the shrimp just jump out of the water and into your pot so I decided to make this dish.  I made a ~shopping list and sent "the girls" out to do some shopping for the things that we didn't have on ~hand.  I sent them out at about 13:00 hours, (1 PM), so that they would miss "rush hour".  They ~came back at 16:00 hours, (4 PM).  What I did not know is that "rush hour" anywhere around ~Charleston is from about 05:00 hours, (5 AM), until around 21:00 hours, (9 PM).  OK, they are ~home and I start to get everything around to make the recipe.  I look and I look and I cannot ~find any cayenne pepper.  Who doesn't have cayenne pepper (or a thirty year old bottle of ~Tabasco)?  Well, Cousin Diane doesn't so rather than to send them out again, and wait to eat ~until they got back about 22:00 hours, (10 PM), I substituted one and one half teaspoons of Old ~Bay for the cayenne and it turned out to be pretty darn good.