One of our favorite recipes for the Christmas Season is Prime Rib.  Over the years, we have cooked            many of them and they were all good but then I started watching America's Test Kitchen on PBS and also    subscribing to many of their publications.  This is their recipe.  I followed the recipe and "aged" the meat    in the refrigerator as directed for the full four days.  When I finally removed it, four days later and looked    at it, I almost had another heart attack.  Here was a ninety dollar piece of meat and to say the least, it            didn't look too good.  I continued to follow the recipe.  It turned out to be the best prime rib I have ever        cooked.  So here is that recipe.

Look for a roast with an untrimmed fat cap, ideally 1/2 inch thick.  Prime grade beef is best but choice        grade will work also.  Monitoring the roast with a meat-probe thermometer is best.  If you have to use an    instant-read thermometer, open the oven door as little as possible and remove the roast from the oven      when taking temperature to maintain oven temperature.  If the roast has not reached the correct                    temperature in the time range specified in step 3, heat the oven to 200 degrees, wait five minutes, then        shut the oven off and continue to cook the roast until it reaches the desired temperature.

1.  Remove roast from the ribs by cutting as close to the ribs as possible.  Reserve ribs.  Using a sharp        knife, cut slits in surface layer of fat, spaced one inch apart, in a crosshatch pattern, being careful to cut    down to but not into the meat.  Rub two tablespoons of salt over entire roast and into slits cut into fat.        Put roast back on ribs (to save space in refrigerator), transfer to large plate, and refrigerate uncovered        for at least 24 hours or up to four days.  (I put a single layer of cheese cloth over the roast and let it age      for the full four days.)

2.  Adjust oven rack to middle position and heat oven to 200 degrees.  Heat oil in a 12 inch skillet over          high heat until just smoking.  Remove roast from ribs.  Sear sides and top of roast until browned 6 to 8        minutes total.  Do not sear the side that was attached to the ribs.  Place meat back on ribs, and adjust so    that it fits as it was before removing the ribs.  Let cool for 10 minutes then tie roast to ribs with two              lengths of kitchen twine.  Transfer roast, fat side up, to a wire rack set into a rimmed baking sheet and        season with salt and pepper.  If using, insert meat thermometer probe into roast being careful not to            touch any bones and hook probe to receiver.  Roast until internal temperature registers 110 degrees,          three to four hours.

(If you want it well done, EAT CHICKEN!)

4.  Remove roast from oven, leaving roast on baking sheet, tent loosely with aluminum foil and let rest for   30 minutes or up to 1 1/4 hours.

5.  Adjust oven rack about 8 inches from broiler element and heat broiler.  Remove foil from roast, form a   three inch ball with it and place under ribs to elevate fat cap so that it will be somewhat even with broiler     element.  Broil until top of roast is well browned and crisp, 2 to 8 minutes. 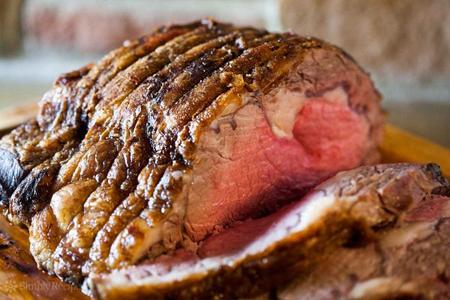